Hey guys, I'm back!  I know I haven't posted that much at all the past few weeks, but my Varsity Baseball season is fully underway and AP tests/SAT coming up it will be tough for me to post a ton, but I will still post.
The past weekends I have been buying a ton of 2011 update packs, so many that I can't post all of the highlights, so instead I will post all of the "special" cards I have. 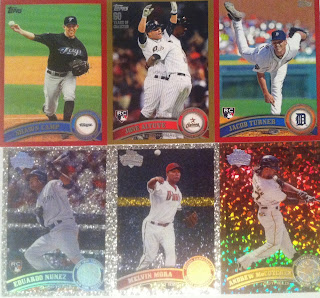 As you can see, I got 2 red parallel cards, a Jacob Turner rookie card and a Shawn Campp.  I also got a gold parallel card, Jose Altuve.  I don't know too much about the rookies but I figure if any of them pan out, it will be awesome to have.  I also don't understand why, from my experience, Topps made the red parallel cards more rare, I think the gold are much more appealing.  The bottom three are diamond cards, which I think Topps did well on last year.  I am very excited about the Nunez rookie, being the Yankee fan that I am, and of course I love the Andrew McCutchen diamond, a phenomenal young player.  I also have always liked/respected Melvin Mora as a player.
This past weekend I missed out on a card show I would have gone to with Drew.  However Drew did get me a picture for my Mom's birthday I will be posting shortly.
Thanks for reading!
Connor
Posted by Connor at 7:00 PM 3 comments:

Hey guys, it's me Connor.  I'm back with some news on my collection.  I haven't posted a lot over the past week or so mainly because the baseball season and training is fully underway! While this is awesome, by the time I get home from practice and done working out, it is usually like 9:30-10:00!!!  While my blog has been dormant, my collection most certainly has not been!  Over this weekend I bought about 6-7 packs of 2011 Topps update series, for my 2011 Topps set which I am doing.  There were to many awesome pulls to post about tonight, so I'll get to that another time.  But in my various trip to Target, I decided I would switch it up and buy my first ever Allen & Ginters.  Take a look: 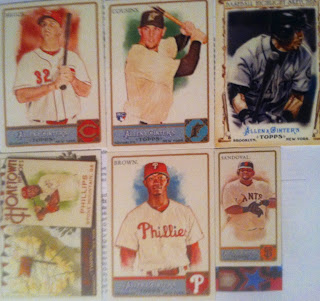 I really like the Ginter's design, especially as a refreshing change while buying 2143902423 2011 Topps packs.

Look for a post this week about arguably my favorite off-season move made by the Yankees this year!!!
Posted by Connor at 6:44 PM 1 comment:

TTM SUCCESS #5- Rookie with a lot of potiential!!!

Hey guys, I'm back with some awesome news.  I recently got back one of my TTM's from a player who I'm really excited about! With my school's Varsity baseball team starting up tomorrow I figured it was the perfect time to share! 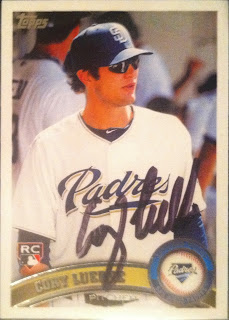 Corey Luebke!!I think this kid has a ton of potential, and I am extremely happy to have his rookie card signed.  In fact, looking at his rookie year's stats (3.29 ERA and a 1.06 WHIP, even racking up 6 wins for a struggling Padres team)

In terms of my collection I have some 2011 Topps to show that I got yesterday, and a few weekends ago.  in case I haven't already said it, I am trying to complete the 2011 Topps set (my first year of collecting) so if you guys have any duplicates let me know!!
See you guys!!
Posted by Connor at 7:08 PM No comments:

Hey guys, the past two days have been great.  Between the weather being nice enough for baseball, and the Yankees playing the Phillies in their first SPRING TRAINING GAME!!! Even though I just witnessed my favorite College, Duke get run out of their own gym, I've been having some luck.

The first success I got was from John "Mule" Miles.  I didn't have any cards to send him, so I sent him some Index Cards and a letter in which he answered all of my questions!!!

On the cards he wrote a bunch of quotes, very deep and I definetly will use them in my life as I play the game I, and we all love.  Overall, it is awesome to add an autograph from someone who played in the Negro Leagues. 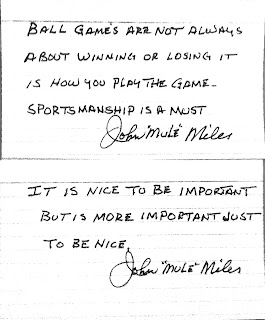 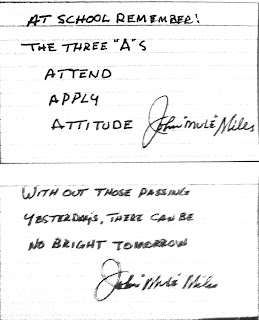 (I tried to make my scan black and white so it is easier to read)
Here is the letter he sent!!! 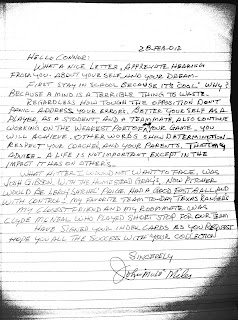 The next TTM success I got was Pat Neshek!!!  He is an awesome signer and a collector himself, so If you guys haven't sent him a TTM yet, try him out!!! 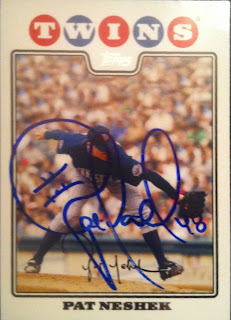 I like the Neshek card and the autograph, as well as John Miles autograph, and am excited to add both of these cards to my collection.

Thanks for reading!
Posted by Connor at 7:34 PM 4 comments:

Hey guys, I haven't been as active blogging as the past few weeks, and February was a record setting month for Connor's Card Collection (With the most page views since June and July of 2011).  I have a ton of stuff to show you guys, and the first of these things was an awesome, and my second TTM pick up. 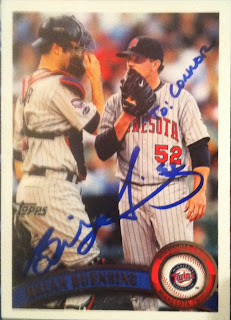 Brian Duensing.  I heard that I had a TTM from my brother, when he called me after my baseball workout, and I had a feeling it was from Mr. Duensing.  While sorting through my cards that I wanted to send out with Drew, I saw I had a Duensing and soon saw he was a good signer.  I have always liked Duensing as an underrated pitcher who I think has potential.  In 2010 he had a 2.62 ERA!!! He had a bit of a rough year last year, and isn't expected to have a good year this year.  I definetly think he is a sleeper and hope he does great.  Nonetheless it is an awesome card to add to my collection, and an active player's signature!!!

In other news, I got a frame for my Virgil Trucks stuff, so I wanted to show you guys that display.

Also, while talking to William and Drew, I realized I wanted to start a set.  Originally I wanted to do 2009, the year the Yankees won it all, but decided I'm gonna start with 2011, the first year I started collecting.  I picked up about 24 2011 Topps over the weekend and I'll post those cards for you guys.
Posted by Connor at 6:58 PM 1 comment:

Hey guys, Connor back, with some awesome news.  First off as you guys can see, I got my first TTM success ever!  It came on a snow day for my school, at a perfect time, as I was mad that my franchise in NBA 2k12 was struggling.  My mom told me I had mail, and when I saw the folded envelope, I was immediately pumped.  I opened up the envelope, and saw amazing stuff, basically another Christmas.  Here is what the contents looked like: 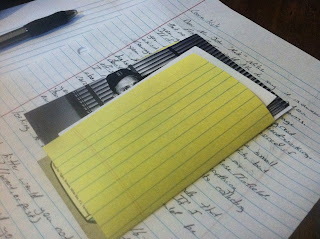 Inside of the folded letter that answered all of my questions, was a whole number of contents.  The first thing I have to show you guys is the card i sent as well as a bonus! 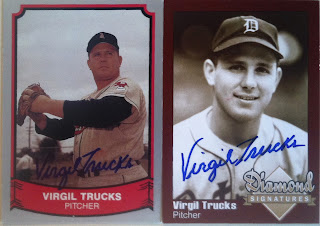 On the left is the card I sent in, and the right is the extra card he sent back!  I actually got the card on the right from Drew at http://drewsbbcards.blogspot.com/. If any of you guys don't follow him, you should check him out, a great guy and great blog. 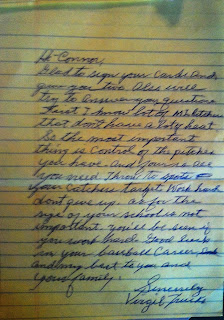 The next is the response to my letter.  The response is awesome, answering my questions on advice for a young pitcher who doesn't throw hard (myself) and I will definitely use this advice in the upcoming season!!! (He also wished me the best of luck) 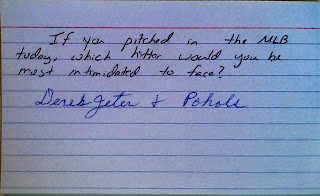 The next is the answer to my question, If you pitched in the majors today which hitters would you be most intimidated to face?  His answered Derek Jeter, and Albert Pujoles (Poholes, he's 93 give 'em a break) 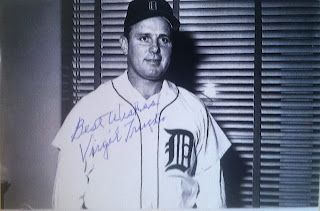 The next is another addition i did not expect, a signed picture, with best wishes inscribed! 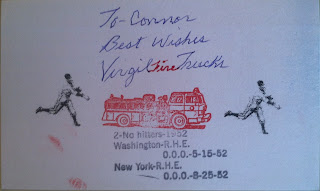 The final piece was another awesome part.  I sent an extra index card, and he stamped the dates of his 2 no-no's in the same season, and the fire truck from Virgil "Fire" Trucks, inscribed to me!
The second awesome piece of news was, while video chatting with Drew, I saw the Packers Defensive End (I am a huge Packers fan as well) tweeted if any one wants to play him in a game of Scramble With Friends for iPad/iPhone.  I immediately jumped at the opportunity and tweeted him my name.  He even responded to my tweet, and played me! How many other people can say they beat a professional D-End in Scramble with Friends!!
Today was an awesome snow day, and I'm glad I happened to be on Twitter at that exact moment!!
Thanks for reading guys!!!
Connor
Posted by Connor at 7:33 PM 3 comments:

First Packs of the 2012 Season

Hey guys! I'm back with some nice, new 2012 Topps cards to show you.  I picked up one of the double jumbo packs (36 cards total) and 2 single packs of 2012 Topps over the weekend.  Here are some of the highlights: 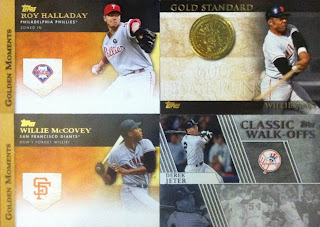 I got 2 golden moments in the pack, a McCovey and a Halladay.  I like the golden moments and they look pretty good.  I also got a Mays golden standard, and Derek Jeter classic walk offs, the homer that dubbed him the nickname "Mr. November". 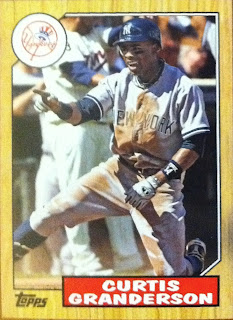 The next card is a mini Topps Heritage? (I'm not really sure what they are officially called) but I like how Topps did it this year.  Last year I loved the Topps Heritage, and I like how this year they are inserts, which makes them more special when you get them.  "The Grandy Man" had a huge, breakout year for the Yanks (41 Homers, and a .916 OPS!!!) 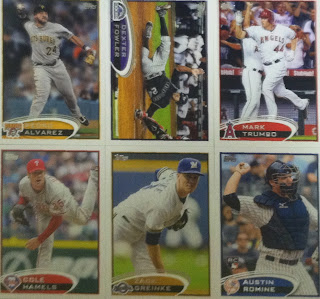 The next are some highlights of 2012 cards.  These are mainly the younger "Studs" I pulled with Hamels, Greinke, and Romaine, a Yankee Prospect I really like are some of the bigger young names, with Trumbo, Alvarez, and Fowler the other potiential stars. 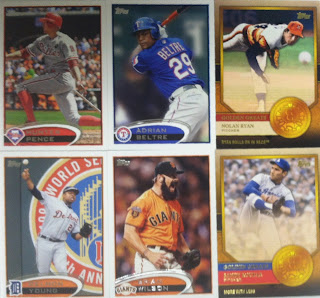 The next are the already big name guys, with Delmon Young making the cut, as a guy who I've always respected/liked.  Also, the Koufax and Ryan insert cards which I think are pretty cool.  I also like the electricity The Beard brings to the game, and Pence/Beltre being established hitters in the MLB.
Thanks for reading guys!!
Connor
Posted by Connor at 6:29 PM No comments:

If you guys want an awesome shot at some incredible things, go check out the contest my friend Drew has on his blog! You have until Saturday to enter so hurry up!!
http://drewsbbcards.blogspot.com/
I will be looking to post soon as I got some cool things from the card show! Sorry about the time off!!!

If you want to see some awesome cards, and some great autographs, Foul Bunt by a good guy William has a blog for this. Go follow William today, he posts regularly!!
http://foulbunt.blogspot.com/

Send me an e-mail to work out a trade or a sidebar addition for each other:
bluedevils4life20@gmail.com

Hey guys, if you guys want to gain followers and help me gain some followers, let me know if you would like to add me to your side bar, and I will add you to my sidebar, send me an email!!!

If anyone esle plays Madden ultimate team let me know so we can get together for a game or talk trades to improve our teams.